So it was time to leave London and head for Spain. I have found the people of London to be very friendly and welcoming. Yes, there is always the odd one out but on the most part I have been treated very nicely by British people, particularly men.

I got up early this morning and repacked, I was very excited about new adventures. Sarah kindly drove me to the station. The train station near her apartment is very well serviced by the London railway system. Which , while we are on the subject, is pretty damn good. Metro trains has a long way to go before they are anywhere near as good as the Parisian or London train system. On London trains there is a toilet on most carriages and a refreshments trolley. Drivers keep you up to date why things are delayed the seats are nice and in general the vibe is good.

Would you like to buy a bag with that – Me: no

Would you like a chocolate bar with that- Me :No

If you buy another postcard you will get one free- Me: No I only have three stamps so I only want three cards

I can sell you two stamps so that you can buy a card and get one free- Me: All i want is what I have put in front of you.

But if you buy one more card you get one free-Me: No. I just want what I have put in front of you and now I want a receipt.

A man behind me said “are you Australian?”and I said “why? ’cause i am arguing with the man trying to up sell me?”  Welsh guy: No ’cause your voice goes up and down like a wave.

Apparently, how English people so easily recognise us (Australians) is by our voice modulation. I never realised we had such a pronounced one. It is not the first time that has been said to me during my week in the U.K.  Maybe I over modulate?

Anyway the newsagent man got me in such a sweat I thought I was going to end up on “Border Security” as they search the very sweaty and wound up person’s bags, but no, once again, it was a breeze. I had allowed myself a lot of time to get through Gatwick and thank god I did as the luggage drop off was not a quick process.

I had breakfast at Jamies Italian at Gatwick. It must be where they send all the staff that aren’t quite up to scratch. Really bad service. I would swear, but I swore in the last post.

I had paid 10 GBP to chose my seat on my British Airways flight, the seat I chose was an exit seat and had lots of room but they changed planes at the last minute , so instead of having leg room I had my knees pressed into my chest for 1 hour and 45 minutes. Now I saved 155 GBP by buying my ticket when I did but that does not mean I won’t try and get my 10GBP back. They should just compensate onboard by giving you duty free goods or plying you with alcohol or upgrading you.  Had I not have paid for a specific seat they could have moved me anywhere and I would not have been so annoyed. 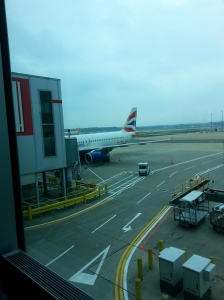 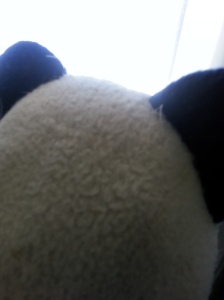 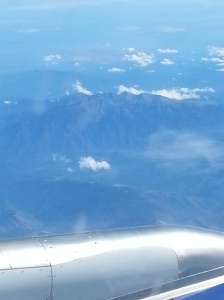 what I could see when Percy wasn’t blocking the view.

Barcelona airport was very warm, there was not a pay phone in sight and I had to ring the apartment manager. The UK sim didn’t call overseas numbers and I couldn’t get the sim out.  If I could have used a phone I would have got the bus into Barcelona but I needed someone with a phone so I got a taxi. The taxi guy so really nice , let me use his phone, explained things that we were passing,and wouldn’t accept me giving him money for using his phone.

My apartment is amazing! I have the top floor to myself and it has a 50 m2 terrace that has lighting and wifi. Do I have to leave?

Malcolm and Henry ( my cousins) are here as well for a few days so I caught up with them which was lovely.We went to a restaurant with some VERY relaxed service it still had a nice ambience to it. All the boss cared about was the football between the Celtics and Barcelona.

One night in Barcelona and I am already a football fan. How do they do that?

Tomorrow it is off to a market tour/cooking class in the morning. 😀