Not much sleeping in going on in NZ, that’s ok though when I get back to Melbourne I will be able to sleep in the two hour time difference. I went down to the Christchurch Museum, a lot of work has gone in to make it as captivating as possible. They have many different areas covering many different aspects of New Zealand’s history. The Antarctic section was interesting. I have a bit of a fascination with the Antarctic. I would love to go there one day. There was a replica of a house that was in a town called Bluff, probably cringe worthy for New Zealanders and foreigners alike but as I had never heard of them it was amusing. Fred and Myrtle Flutey covered their walls with Paua shells and then opened it up to the public.

It was very kitsch or odd or something. They used to do the tip top bread ads and became quite the NZ household name.

you may need to scroll down to the cute dog if you don’t want to read another rant. 😉

It took me around an hour and a half to see it all. I was very glad that I went until… A lady with a soft voice approached me to do a survey , the soft voice should have sent me running. There is something about softly spoken people that screams passive aggressive to me. Anyway, I want Christchurch to continue to grow after the terrible devastation of the earthquakes of 2010 and 2011 so I said I would do it. Instead what I should have asked is how long will it take. It was a beautiful day, not a cloud in sight, 5 mins into it ( it was on an iPad) it says I am only 28% through it. I asked how much longer it will take and she said it moves faster as you get further through it, anyway 5 mins later we have hit the half way mark. She was hovering over me reading everything and generally crowding me. To cut a long story short , I didn’t finish the survey. Perhaps they could ask for people’s email addresses instead of making us endure that.

Ralph the delta dog at work

Then I went off to the re start mall where they have made a mall from shipping containers. They had a table where you can put your phone on it and it charges it – nifty. The mall was very nicely set up and had some yum looking food vans. 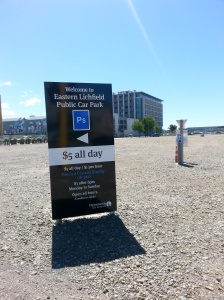 On seeing this I finally got the “joke” the wine tour guy made about it being easy to find a carpark in Christchurch.

I walked off to meet a doctor ,that used to work where I do, for lunch. It was in a cafe that is in the middle of an area that was devastated by the earthquakes. It seemed to be the only building that hadn’t been turned into a pile of rubble. The cafe was called c1 and they do a seriously good espresso. At dinner time they also do sliders that get delivered in a pneumatic tube.

It was really quite confronting how devastated the earthquakes had been. Somewhere there must be a giant pile of rubble. I went to the quake city exhibition and minutes into it I was in tears. It must have been a very frightening experience. 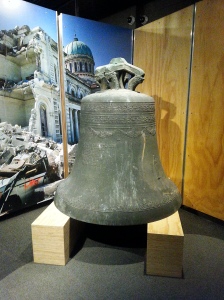 In my drawer at the hotel I am staying at is a torch and a bible. The torch so that if there is an earthquake I can see my way out of the building . I didn’t go on the quake tour bus as most of it has now been flattened.

I had a leisurely stroll back to the Hotel and enjoyed some down time.

I had booked into the restaurant there called Pescatore. They have degustations and an a la carte menu. They made me feel very comfortable as a solo diner. The food was incredible as were the matched wines.

as you walk in the door you are presented with a berry cleanser that was delicious and then on sitting down an oyster beignet with seaweed.

then came the courses

a selection of petit fours including an edible business card

It was like eating art and a wonderful experience. I hope it isn’t the last time I get to eat the chef, Reon Hobson’s food. It was extremely memorable and topped off my last night in New Zealand beautifully.